“What I didn’t realize was that my mother was
just trying to say she missed me." 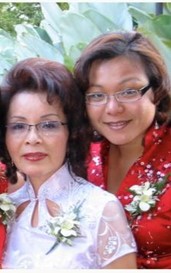 It takes a village to raise a child. That was what growing up in Singapore was like. In my village, you could go to anyone’s house for lunch—you didn’t have to ask permission—and all the mothers would just feed whoever showed up. There was never any worry that you didn’t have enough food—if ten children came to your house, you just found food to feed all of them. For, anak kamu ialah anak saya— meaning, your children are my children. Likewise, if anyone were to come to your house in the evening, you would offer them dinner and never let them leave without it. This is just how we showed hospitality and friendship.

Despite having enough to eat and a roof over my head, my family did struggle with money at times. When I was about 6 years old, I wanted the Jaime Sommers Bionic Woman doll. Everybody was getting it; all my friends had the Bionic Woman. I kept pestering my mother for the doll for my Christmas present, but she said no. I remembered crying my eyes out as I thought of how horrible for her as a mother to say no to me; I had no clue then that my parents were having a particularly tough financial year. I never knew, until much later, how difficult it was for my mother to say no to me.

My mother had been denied a full education while growing up on a farm in Malaysia. At the age of fourteen, she had to stop going to school to stay home, and help with the household chores. She was highly intelligent and loved learning—so she really resented her parents for taking her out of her studies while her brothers were allowed to continue their schooling. My mother used to always wonder what she could have accomplished had she been allowed to study further. As a result, she really impressed upon my sisters and me that we had to go to university so we could fulfill our dreams. A university education was beyond our means, but my mother made sure our tuition fees were paid every semester. She was resourceful and always found a way to raise money for our fees.

It was only when I went to the National University of Singapore that I was in a secular environment. All my life before that I was in a convent school. We were taught by nuns, and it was strongly ingrained into us that we had to behave like young ladies, be modest, and speak and write proper English like the British. At my convent school, we had strict rules. We could only wear accessories which were green, white, or black to match our uniforms. If you wore a red ribbon in your hair, a nun would come over and label you a prostitute. The nuns would also measure your skirts with a ruler, and if your skirt was too short, they would call you a trollop, or a strumpet, and send you to the Principal’s office. The first time this happened to one of my friends, we thought the nun had called her a fish—we had to go look up what a “trollop” was and was shocked when we found out its meaning!

When I went to the National University of Singapore, I realized that my convent schooling did not prepare me for the secular university life. I really found out how much I didn’t know when I was at university. I felt ignorant and stupid. Most of my professors were expatriates from Britain and expected a particular variety of English in our essays: Standard British English. I struggled with writing academic essays, and reading poetry about faraway lands which did not resonate with me living in tropical Singapore. After I graduated from university, I worked in an advertising firm which encouraged creativity, so I didn’t have to write “academese.” It was a very dynamic and exciting industry. I always went out for drinks with my colleagues and clients after work—that was the culture. My mother didn’t like my new job and got upset with me regularly because she hardly saw me. She said that I treated the house like a hotel. What I didn’t realize was that my mother was just trying to say she missed me. When your children grow up, they don’t need you as much as they did when they were younger; this is difficult for a mother. But I didn’t understand then.

I knew I wasn’t going to stay in advertising. It’s very dog-eat-dog—people step on you just to get ahead. I was in advertising for three years when I thought: “What am I doing? I’m not doing anything noble! I’m just enticing people to buy things they don’t need.” I had always wanted to be a teacher when I was young. When I’m teaching, I feel like I’m helping someone and making a difference. So, I quit my job in advertising and completed my master’s degree in English. Soon, I began teaching in postsecondary institutions and immediately found my niche. Even though I am not formally teaching now, I am still involved in education.

I have finally found my purpose in life: to help people become the person they have always dreamed of becoming. I would not have been able to fulfill this dream if my mother had not drummed into me the importance of a university education.

My mother passed away in 2017 – it has been more than four years. I think of her often. When you lose someone, you appreciate everything about them. You can say the most horrible things to your mother and get away with it because of her unconditional love for you. My own daughter is twenty-five and we have similar fights now. I have finally realized how much my mother loved me all those times when she was trying to tell me she missed me.

(Interviewed by Glenn Clifton; photo provided by the interviewee)

Last StoryBack to Map Next Story